Hydrocarbon refrigerants are considered around the World to be superb professional refrigeration products and are widely used outside of North America in a full range of applications and systems. RED TEK 12a is a highly refined Hydrocarbon product formulated and blended to replace R12 and R134a refrigerants in existing installations with few, if any, modifications to an existing system.

RED TEK 12a, a proprietary blended, highly efficient Hydrocarbon refrigerant, is designed as a direct replacement and retrofit refrigerant option for replacing R134a and R12 substitutes in automotive air conditioning and refrigeration systems. 12a operates at lower head pressures and offers improved cooling properties and performance versus R134a and R12.

RED TEK 12a possesses similar volumetric refrigerating effects to R12 and 134a refrigerants and operates at lower head pressures versus R12 or R134a. It can be used effectively in R12 or R134a refrigeration systems without major “retrofitting.”

RED TEK 12a is a 100% natural organic, HC refrigerant that is non-ozone depleting and non-global warming. 12a refrigerant has a very short atmospheric lifetime-weeks and months vs. 100’s of years for CFC-R12. Once released into the atmosphere, RED TEK 12a breaks down into carbon dioxide and water. Although carbon dioxide is a greenhouse gas, it is a very weak one. The significant effect of carbon dioxide on global warming is due to substantial quantities released through burning fossil fuels for power generation. The amount released using Alkane / Hydrocarbon refrigerants would be an extremely low proportion of the overall global total.

No retrofitting needed. RED TEK 12a is designed as a direct drop-in replacement for R-134a and R-12 substitutes. RED TEK 12a requires no significant redesigning of the refrigeration system because it is compatible with R134a, R12, metal components, compressor motor materials, mineral, and synthetic (Ester and PAG) lubricants, seals, gaskets, hoses, compressors, and O-rings.

RED TEK 12a, as indicated and classified as a Hydrocarbon, is a highly refined product with a boiling point of -34.7 degrees C, at atmospheric pressure, and designed to be as close to the operating performance of R12 systems, but also in new systems as a direct replacement for R134a.

The density of RED TEK 12a is significantly lower than R12. This fact, combined with the higher latent heat and thermal conductivity, has the desirable effects of reducing the weight of refrigerant required to extract a specified amount of heat. In practice, the required weight of RED TEK 12a needed to give the same refrigeration capacity and performance as R12 or R134a is 35% and 40%, respectively. Significantly less by weight than either traditional products.

Although RED TEK 12a is developed to give similar operating conditions and capacities as R12 and R134a, this product is an Alkane / Hydrocarbon and comes from the same hydrocarbon family as propane and butane. It is imperative to know that commercial propane and butane must not be used in an air conditioning or refrigeration system. These fuel grade products contain high volatility and variable compositions and impurities. This will significantly reduce the reliability and performance, leading to premature failure and would result in:

RED TEK 12a does not become caustic when contaminated with moisture or oxygen. Non-toxic, non-carcinogen, autoignition temperature about 1385F. No long term health risks have been attributed to RED TEK 12a refrigeration. Safety Data Sheets (SDS) are available and provided on all Red Tek refrigerants.

Due to the smaller amounts of Alkane refrigerants required in an air conditioning system, this is not a relevant issue and has been addressed through several extensive liability risk assessments carried out on these products. It is essential to know that outside of the North American marketplace, Hydrocarbon refrigerants make up approximately 50% of the refrigerant used throughout the World.

Alkane / Hydrocarbon refrigerants are extraordinarily efficient and effective. RED TEK 12a has been formulated and blended to give similar capacities as R12 and R134a, making it simple to use in existing R12 and R134a systems.

RED TEK 12a has been designed, formulated, and blended to operate with similar system pressures as R12.

The discharge temperature of RED TEK 12a is similar to R12 and R134a at the same evaporating and condensing temperatures.

When a refrigerant boils, the composition of the vapor may not be the same as the liquid; the vapor could be more abundant in the component with the lower boiling temperature.

This is known as the temperature glide. In practice, it will not be as much as indicated by the difference in the bubble and dew temperatures on the charts and is in line with other refrigerant blends currently available throughout the Industry.

RED TEK 12a has a lower density (but higher latent heat per unit weight and better thermal conductivity) than R12. In practice, this means the charge required, in weight terms, is lower than for R12 and R134a to give the same volumetric flow rate and the same capacity.

The charge for RED TEK 12a is 35% of that required for R12 by weight, and 40% of that needed for R134a by weight. Significantly less product is used to complete the same function.

RED TEK 12a contains no chlorine or bromine and therefore has “NO” ozone depletion potential. Its global warming potential is related to the carbon dioxide produced when it breaks down in the atmosphere. When compared to R12 or R134a, Greenpeace International shows the amount of carbon dioxide is insignificant. 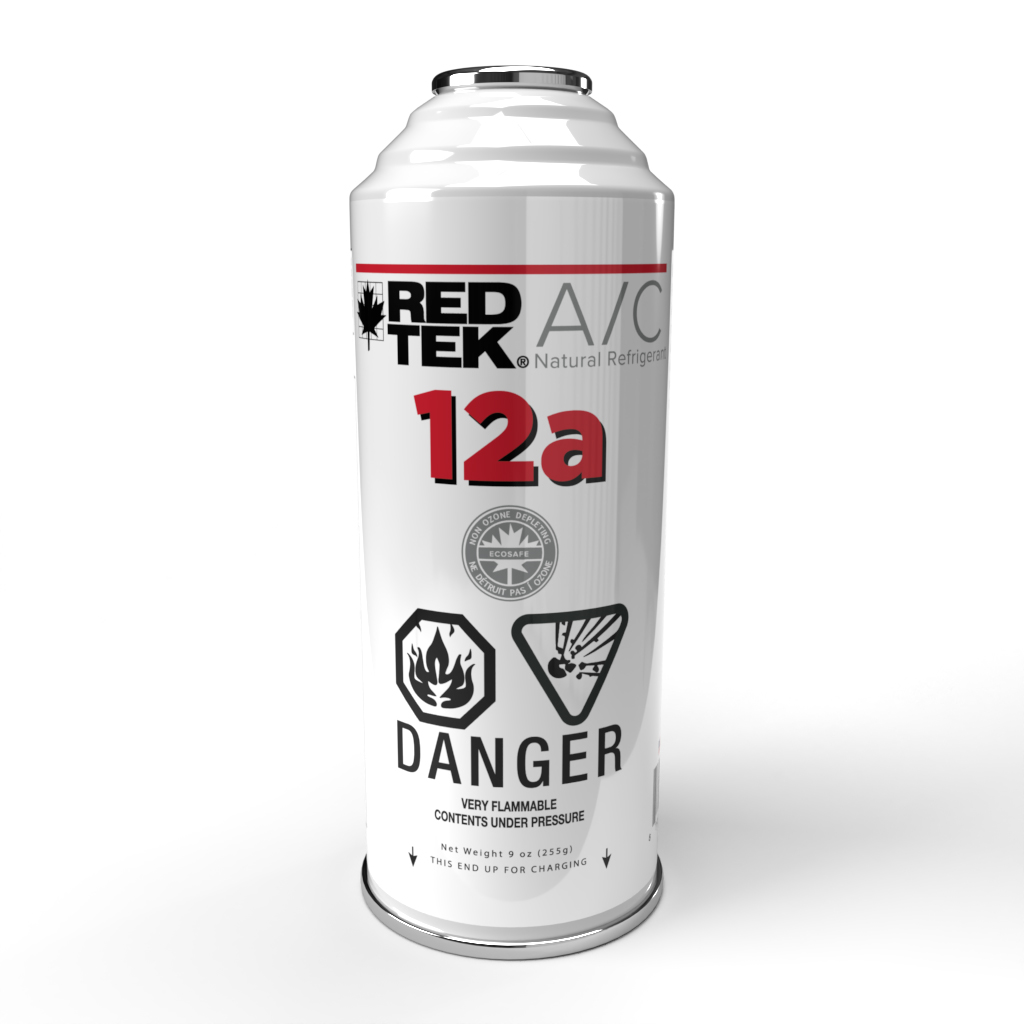 Require Certification to Purchase: No